JP Morgan analysts believe that the dollar will weaken regardless of the US electoral outcome. In the event of Trump's victory, NordFX analysts forecast that its fall may reach 10-15%. If, on the other hand, Hillary Clinton wins, the fluctuation of all indicators may reach ± 5%. 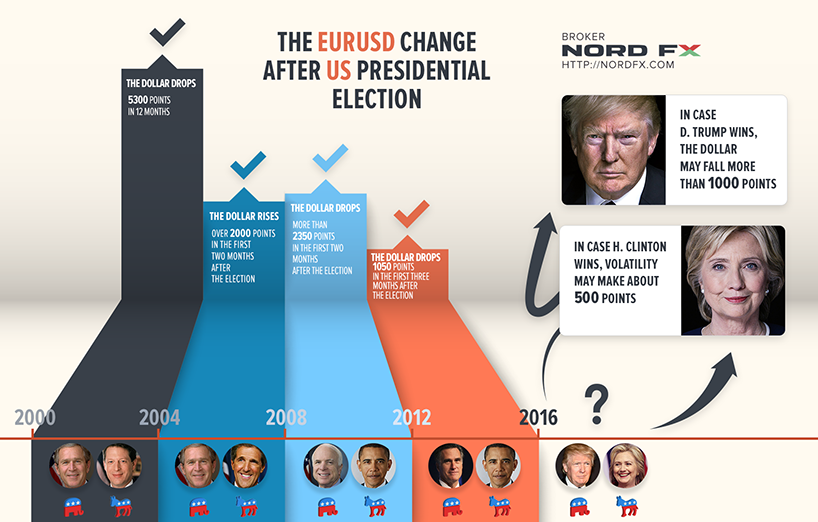 The upcoming presidential election on November 8 could significantly change the situation in the US economy and consequently lead to major fluctuations of the dollar against other world currencies. The electoral platforms of the two major candidates for the US presidency, Hillary Clinton and Donald Trump, promise major changes in trade policies, according to Bloomberg. To add to this, according to analysts from JP Morgan Chase (one of the largest brokers) a victory of any of these candidates may result at the very least in increased tension between Washington and its partners, if not in outright trade wars. This carries the risk of a reorientation of investors from the dollar to other currencies.

A similar view is shared by Deutsche Bank, as well as HSBC and Credit Suisse. According to one of the leading strategists of the Credit Suisse New York branch, S. Jalinoos, the dollar should start cheapening right after the election.

A statement on USDJPY has been made by Bank of America Merrill Lynch experts as well, who expect that the election of Donald Trump will cause the dollar to fall in price relative to the appreciation of the Japanese currency.

The situation for GBPUSD is more complicated: on the one hand, there are disturbances associated with the UK exit from the EU, and on the other there is an equally large dose of uncertainty associated with the presidential election in the United States. Morgan Stanley Research believe that the dollar may well give way to the pound and that the pair will go up.

"We are certain to have trade conflicts under the next president,” says John Normand of JP Morgan. “These will be major in the case of Trump's victory and moderate in the case of Clinton’s." The same opinion is shared by analysts of the international brokerage company NordFX. In their view, if Donald Trump becomes US president the dollar could fall against the euro by an excess of 1000 points.

"If Hillary Clinton wins,” says NordFX chief analyst John Gordon, “volatility is likely to be smaller and will not exceed ± 5%. But these five percent for the EURUSD will make about 500 points.”

“Let's take a look at what usually happens after elections,” continues John Gordon. “In 2000, the Republican George W. Bush won, resulting in the dollar going into a sharp nosedive and losing about 5,300 points against the euro over the course of the year. The next election took place in 2004, and Bush won again. It would seem that nothing should have changed but, on the contrary, the pair made a U-turn inspired by his new electoral campaign promises, and it only took two months for the US currency to rise by 2000 points. In the 2008 election, Democrat Barack Obama became President, which resulted in the trend changing again: the dollar dropped more than 2350 points in six weeks. The Obama re-election in 2012 brought one more turn and a bounce upwards of 1050 points in less than three months.”

“And note,” stresses the NordFX expert, “a bounce always takes place, regardless of who wins - the Republicans or the Democrats. I am confident that this election will not be an exception. Most likely, the post-election trend, as before, will last for 2-3 months - as long as investors do not completely figure out which of the electoral promises of the new President will be met, and which will merely remain words on paper. This is a very good period for traders, allowing one to earn good money.

At this moment, we can expect a powerful movement of not only currencies rates, but also of stock market indices and of US company shares, and these movements will begin almost immediately as soon as the first preliminary results of the vote count are made public. In this situation, traders should allocate their financial assets very wisely and should be alert, so as not to miss the utilise 100% of these new trade opportunities."