We shall first examine two advisers: MACD Sample and Moving Average. An undisputable advantage they possess is that the developer MetaQuotes Software Corp. has included them in the standard edition of the MT4 platform. This means that there is no need to search for them online and separately install them onto your terminal. All you need to do is open the ‘Navigator’ panel and they will be right in front of you (fig. 1).

Since MACD Sample is displayed first, we will start with it. 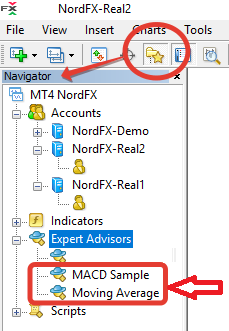 As you can see, the reviews are not at all uniform: they range from “respectable profits” to everything being in “negative territory”.  To understand what MACD Sample really is, we therefore need to conduct our own tests. Let us first see how it works.

Guessing that the advisor is based on the MACD indicator, which is present in all MetaTrader terminals, is quite easy (fig. 2). 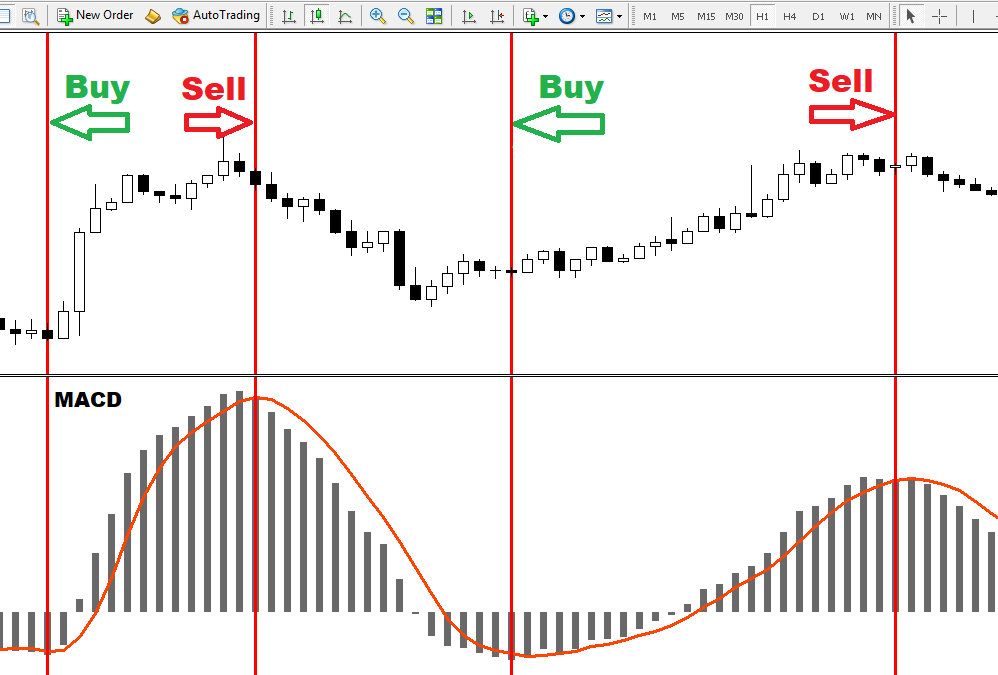 The buy order happens when the indicator histogram is located below zero and crosses the signal line from bottom to top.

Meanwhile, for sell orders the histogram needs to be above zero and cross the signal line from top to bottom.

The default settings of MACD Sample have been optimised by the developer for the GBP/USD pair on the four-hour timeframe. Our own historical analysis has, however, given meagre results. In the one and a half-year period from 01.01.2016 to 30.06.2017 the profit with a lot of 0.1 was just USD 478 and a maximum drawdown of USD 1390. The number of trades was not very satisfactory either: there were just 78 trades in 78 weeks, i.e. a trade per week (fig. 3).

We saw slightly better results with GBP/USD under default settings on the H1 timeframe: a profit of USD 838 and a maximum drawdown of USD 637 over 146 trades (Fig. 4).

In addition to testing the advisor with GBP/USD on the M1, M5, M15, M30, H1 and H4 timeframes, we also tested the advisor on the EUR/USD and USD/JPY pairs.

The best result over half a year with EUR/USD was on the one-minute timeframe M1: it delivered a profit of USD 1148 with a maximum drawdown of USD 395 over 91 transactions (fig. 5).

When it comes to USD/JPY, the largest profit was on the M5 time-frame: the profit was USD 1273 with a maximum drawdown of USD 874 over 83 transactions (fig. 6).

The results above demonstrate that MACD Sample is indeed able to provide a small profit given certain settings and on certain currency pairs; however, what we have seen is a far cry from a stable profit. Despite its seeming simplicity, the advisor requires scrutiny, which should include repeated and diligent testing as well as the constant monitoring of its trades.

Furthermore, the small number of transactions it completed (just one or two a week) means that it is difficult to infer that similar results will be observed in the future.

Some sources suggest using MACD Sample for training purposes. We do not recommend doing that, however, as the numerous negative results that testing it gives may lead to a beginner trader developing a sceptical opinion of algotrading as a whole. Just because of this, it is better to learn using more profitable and more stable advisers.

* – this rating is determined based on testing conducted by us and represents exclusively our opinion. The possibility that testing the adviser on different currency pairs and using different settings may deliver significantly better results cannot be excluded.

The next article will discuss the results of our tests of the second installed indicator on MT4: Moving Average.

« Testing Forex Robot Advisers
Receive
Training
New to the market? Make use of the “Getting Started” section. Start Training