A Brief History of Forex: From Ancient Times to the Present


What is Forex, when, how and why did it appear? Every trader and investor should know the answers to these questions. After all, if you cannot answer them, what kind of professional are you?

From the first "currency pair" to brokers and traders

When do you think the Forex market history began? The term itself is an abbreviation for the two English words Foreign Exchange, that is, Currency Exchange. It seems to be clear what an exchange is:  you give me something, I give you something. But what is currency?

As the "Finance, Money and Credit" dictionary says, in a broad sense "currency is any commodity capable of performing the function of exchange." Tens of thousands years ago, ancient people exchanged mammoth skins for bone arrowheads. Perhaps it was the first “currency pair”, which started what we now call Forex.

The role of money at different times and in different parts of the planet was played by stones with holes and shells, salt, honey and cattle, grain and slaves, butter and cocoa, whalebone and even... beer. In Assyria and Egypt, gold began to be used as money as early as 2000 BC. But it took humanity about 15 more centuries to move from pieces and ingots of precious metals to minting coins according to a certain standard. It only happened in the 7th century BC. The very first paper money appeared in China in 910: quite recently, by the standards of History.

Four centuries later, in 1291, another step was taken towards the creation of an international financial market in Florence (present-day Italy). At that time, all developed countries already had their own currencies. But no one knew how many shillings, for example, to give for a crown or how many pounds for an escudo. And that's when exchange letters appeared, and exchange rates began to be set by private banks.

The Forex market acquired even clearer outlines in the 16th century in Amsterdam (Netherlands), and then in other large cities, where trading in different currencies began. Exchange rates fluctuated depending on the balance of the issuing countries. It was during this period that traders and intermediary brokers appeared on the market, engaged in cashing exchange letters. 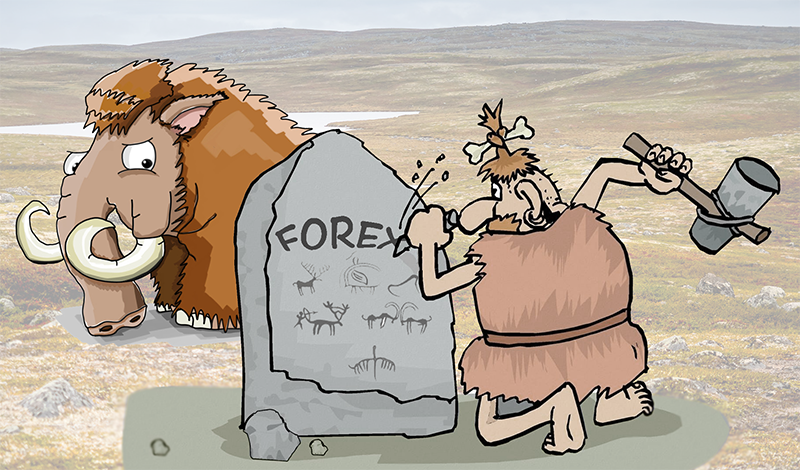 Gold is the most important of metals.

Centuries were passing; however, gold was still remaining the bedrock. It was the most sustainable asset, which merchants, industrialists, bankers and monarchs held in their reserves. And the currency of every self-respecting state was backed by its gold reserves.

The gold parity of major currencies at the turn of the 19th and 20th centuries was as follows:

Gold coins had free circulation on a par with paper bills. And the volume of paper money was determined depending on the size of the country's gold reserves.

This stable situation lasted from 1879 until the outbreak of the First World War in 1914, when the free exchange of paper money for gold stopped.

Post-war hyperinflation in Germany in 1920-1923 became one of the largest economic tragedies of the twentieth century. It reached 3.25 million % per month (that is, prices doubled every 49 hours).  The workers tried to get their wages every day and buy something for the money they received, at lunchtime. But even then, inflation could eat up to a third of what they earned. Banknotes could be used to heat the stoves instead of firewood. And it was 1923 that made the rise to power of the Nazis, led by Adolf Hitler, possible.

This is not to say that the 1920s hyperinflation in Germany was anything unique. A similar situation was in Soviet Russia, Poland, Hungary, Austria, which prompted the idea of returning the "Gold Standard". However, the global financial crisis in 1929 forced it to be abandoned once again. A few years later, World War II began.

From World War II to the Present Day

The next stage, important for the market, began in the small resort town of Bretton Woods (USA). There, the United Nations Monetary and Financial Conference was held in July 1944, which brought together 730 delegates from 44 countries.

It was at this conference that the foundations of the Bretton Woods monetary system were laid and decisions were made to establish the International Monetary Fund and the International Bank for Reconstruction and Development.

The Bretton Woods conference also resulted in the creation of an international fixed exchange rate system based on the gold standard. Under this system, currencies were pegged to the US dollar, which became a reserve currency and was convertible into gold at a flat price of $35 per ounce.

The dollar's "peg" to this precious metal caused problems in the United States over time. The costs of the Vietnam War, monetary inflation from the Fed, and a number of other reasons led to the drain of American gold reserves in the 1960s. The Treasury did not have enough gold to cover the huge amount of dollars, which, among other things, were in reserve with banks in other countries.

The depletion of the US gold reserve ended in collapse. And on August 15, 1971, US President Richard Nixon unilaterally suspended the convertibility of US dollars into gold. This decision actually made the dollar a fiat currency, and led to a meteoric rise in the price of the precious metal. (In 1980, $850 was given per ounce of gold, and the price rose to $2,075 in August 2020).

After the shock decision of President Nixon, the international monetary system changed again, choosing a floating rate. In 1976, an international conference in Jamaica adopted the modern system in which exchange rates are set not by the government, but by the market based on supply and demand. Moreover:

- from that point on, central banks were allowed to sell and buy gold as a common commodity at market prices;

- and the British pound sterling, the Swiss franc, the Japanese yen, the German mark and the French franc were recognized as reserve currencies, in addition to the US dollar (the latter two have now been transformed into euros).

The Jamaican system still operates in the world. However, the global crisis of 2008-2009 initiated a wave of discussions about the need to change it. But no specific decisions have been made so far.

Trading in the 21st Century

Trading veterans may still remember brokers working on exchanges in noisy halls filled with competitors. And clients ging trading orders to brokers by telegraph, teletype or telephone. But scientific and technological progress does not stand still. The development of computer technology and the emergence of the Internet have radically changed the life of the planet. Naturally, these changes have not spared financial markets either.

Since 1995, it has become possible to make transactions 24 hours a day, online. But the real Forex boom began in 2002, when computers connected to the Internet became available to tens and hundreds of millions of people in various parts of the world. If earlier operations in the financial markets were the lot of the elite, now the markets have turned to the common people. Thanks to the low deposit and to the leverage (for the NordFX broker, it is 10 USD and 1:1000, respectively), even a low-income person can enrich their budget seriously. And these will be helpful:

● knowledge of technical and fundamental analysis, which on can also get online without leaving home,

● as well as social trading services­ PAMM and Copy Trading, which NordFX offers to its clients.