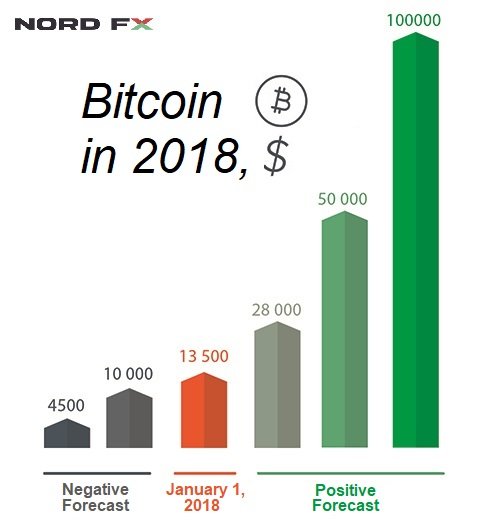 The past year has been a landmark one for bitcoin. Even those without the faintest idea of what digital currencies were, have certainly heard the magic word, bitcoin, at least once or twice. It was everywhere: in newspapers, on TV, on the radio, on the Internet. This wasn’t surprising: over eleven months of 2017, this digital currency has grown 20 times (from USD 900 per 1 coin to almost USD 20,000). The surge in demand pushed it higher and higher even as queues of those wishing to gain unfathomable profits gathered on crypto-exchanges. And then, suddenly,

in just the one week that lasting from 12 December to 17 December, bitcoin lost over 45% in value. This shattering collapse showed that a strategy based on the "buy only" approach was not always profitable for traders and investors: it could also be disastrous.

So, what is ahead for Bitcoin in 2018? Should one buy it or, instead, sell it? Or just dismiss these virtual coins as something overly unstable?

"It's worth mentioning," says John Gordon, leading analyst at brokerage company NordFX, "that during the period bitcoin fell, many other crypto currencies were growing. This suggests that crypto-investors are reluctant to leave the blockchain market and would prefer to, depending on the situation, shift from bitcoin to other coins, and vice versa. Nobody wants to give up the opportunity to receive hundred and thousand percent gains. Therefore, one should not expect a massive outflow of funds from the crypto market to the forex market or to the stock market. The only question is which of the coins will be most investment-worthy in 2018. Will bitcoin retain its leading position, or will it be replaced by another crypto currency, say, Ethereum?"

"Because of growing commissions and very slow transactions, bitcoin is no longer needed as a means of payment, according to Jez San, developer and CEO at FunFair Technologies. In his opinion, bitcoin is an unreliable investment opportunity as well, despite it showing impressive results in the past year. San believes that it is obsolete and looks like the DOS operating system, whilst Ethereum is like Windows or Mac OS: this is why developers create thousands of applications on it, suggesting that it is Ethereum that has the bright future."

Macro expert Peter Tchir is also skeptical of bitcoin: in an interview with Forbes, he said it currently behaves like any regular overbought asset, which suggests that consumer interest in it is declining.

However, it is possible that the decline is temporary, and demand will resume. Thus, according to a recent survey by Harris, only two percent of Americans own bitcoin, but 19% said they plan to purchase it within the next few years. This implies a tenfold increase in the market.

"It is possible that the cryptocurrency bubble will reach USD 10 trillion, and this is 20 times more than today," said Mike Novogratz, a billionaire who has invested a third of his fortune in cryptocurrencies, in his interview with Fortune.

"We have analyzed the expert opinions on the future of bitcoin," says John Gordon of NordFX, "and if we try to bring them to some common denominator, the following picture emerges: experts do not preclude the fall of bitcoin, seeing 4,500-10,000 dollars per coin as a minimum. However, this fall, if it takes place, will only be temporary. The general outlook is optimistic enough: during 2018 this currency may grow to 50,000-100,000 dollars.

Of course, these figures look very impressive, but if you consider that this cryptocurrency would start from the $15,000 mark there is no longer a reason to talk about any twentyfold increase in its value, like last year. The growth will be much more modest: 3-5, maybe 6 times. But, as you know, this is, nevertheless, several times the rate of return of investments in stocks or traditional currencies."

Spencer Bogart, an expert commenting in the Daily Express, named USD 50,000 as the target. He, along with Julian Hosp, founder of the cryptographic company TenX who proclaimed a figure of USD 60,000 on CNBC, agree with John Gordon’s assessment. As for the well-known anti-virus vendor John McAfee, he thinks the price may rise above USD 100,000 per bitcoin.

"Way more modest are the forecasts from WalletInvestor," continues John Gordon, "thus, according to their experts, Bitcoin will rise to around USD 28,000 (85% increase) in 2018, Ethereum will reach USD 1,940 (60% increase), and Litecoin USD 405 (60% increase). But even with such a forecast, cryptotraders and investors can multiply their profits many times over with the aid of leverage, which we as a company are ready to provide them. NordFX can credit its clients' transactions up to 1000 times their own capital, absolutely free of charge and without any collateral. Thus, to buy 1 bitcoin at its current price, it is enough for an investor to have only a couple dozen dollars on his account. This offering is unique in the market. As for opening an account, it only takes a minute or two, after which the client can make transactions to both buy and sell cryptocurrencies. The latter, by the way, is also very important, since it allows you to make a profit even in the event of potential cryptocurrency collapse. After all, as last December showed, this is not impossible, even with numerous optimistic forecasts.

Currently NordFX gives clients the possibility to сarry out transactions with the three most popular cryptocurrencies: bitcoin, Litecoin and Ethereum. We are, however, closely monitoring the blockchain market and, should the situation change, we are ready to quickly expand the list of available trading instruments."