Bitcoin: although this currency is virtual, many people earn and have already earned real millions of dollars thanks to it. More than 1,000 people have become owners of fortunes with six, seven, eight zeros, and five people have become billionaires. Moreover, one does not need to work until a very old age: according to Forbes, the average age of crypto millionaires is only 42.

On May 1, 2017, one bitcoin (BTC) cost 1,600 US dollars, and on December 10 of the same year, it was already worth almost 20 thousand! Or rather, 19.187 dollars. It is easy to calculate that the owners of this cryptocurrency were able to make a profit of 1100% in eight and a half months. The events of the next 2018 were called by NVIDIA CEO Jensen Huan by an apt word "crypto hungover", and the well-known financial strategist from Wall Street Tom Lee called them "crypto winter". The price of this virtual currency quickly flew down and, a year later, on December 9, 2018, it reached its low of 3,215 dollars, "shrinking" six times.
Various forecasts had been given for the past year: from a complete collapse of Bitcoin to the rise to the $100,000 mark. And now we can call the exact figure – this main cryptocurrency cost $7,200 per coin at the end of 2019, having risen in price more than twice in a year.
"Bitcoin, despite all the rate hikes, rose by 110% in 12 months, - says the NordFX broker leading analyst John Gordon, - the S&P500 index rose by 22.8%, and gold added 19% over the same period. The average yield on dollar bank deposits is only 0.5-1.5%."
According to CNN calculations, Bitcoin is the most profitable asset in the last 10 years. 1 dollar invested in this cryptocurrency at the beginning of the decade is now worth $90,000. This means that if one invested some 11 dollars in BTC in 2010, now they could become a millionaire. And although the stock market has been under the influence of bulls all these years, other assets fade in comparison with Bitcoin, - $1 invested in the shares of American companies turned into $3.46. This may be an impressive growth for the stock market, but for the crypto market, such results are insignificant, just compare $90,000 and $3.46. 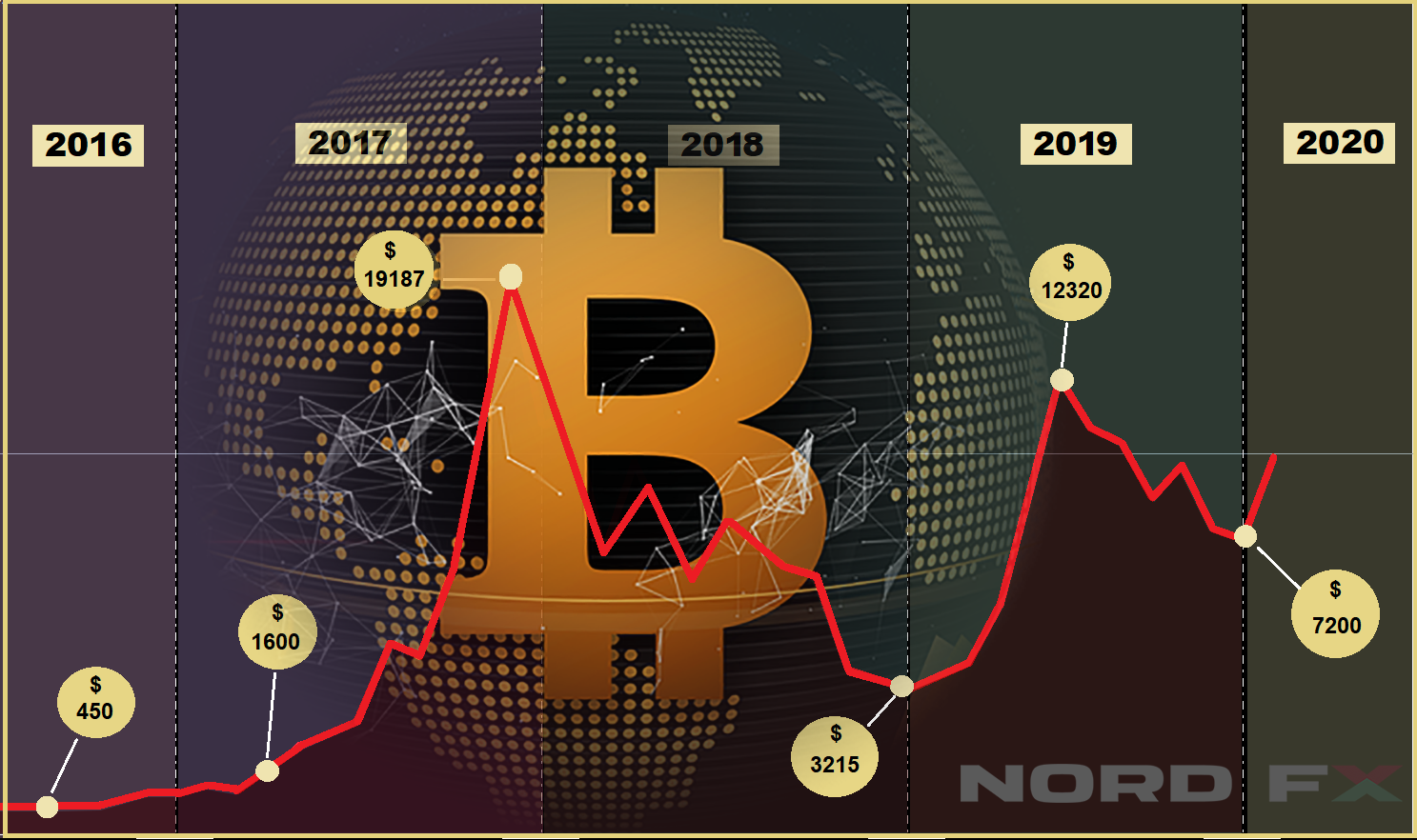 Bitcoin is certainly the main cryptocurrency in the world, leading by a huge margin. Analysts at Canaccord Genuity believe that by 2021, its rate will reach $20 thousand, the head of the BitMEX exchange Arthur Hayes calls $50 thousand, and their colleagues from Galaxy suggest that this is not the limit, and under certain conditions, the main cryptocurrency may rise in price to several hundred thousand dollars. The well-known venture investor Tim Draper supports his colleagues, he believes that the capitalization of Bitcoin will be 5% of the entire world economy by 2023, that is, it will approach $5 trillion ($250 thousand for 1 coin).
But all this is in the future. And all these are predictions that, as we know, can come true, or may, on the contrary, be empty speculation. What about now, the real present?

Let's look at the Bitcoin exchange rate for the first two weeks of 2020 and calculate how much an ordinary person could earn by investing in this cryptocurrency.
Option 1. So, on January 01, its quotes were $7,200, and on January 14 - $8,800. And if you had bought it on a crypto exchange, you would have earned $1,600. That is, your profit would be 22% in just 2 weeks! Is it a lot? Pretty much so! You are unlikely to have received even $5 on a bank deposit over the same time. And here, it is $1600! But even this profit of yours could have become many times greater if you had taken advantage of margin trading.
Option 2. "In order to open a transaction, and, simply put, buy one Bitcoin," says John Gordon of NordFX – "our clients only need to have $150 in their account, and we will credit the rest. This happens automatically, without any collateral and paperwork, you just need to open a trading account with us online."
And what happens in this case? It seems to be the same as for Option 1. If you buy Bitcoin on January 01 and sell it on the 14th, you get a profit of $1600. But at the same time, you actually invest in the transaction not $7,200, but almost fifty times less, only $150. Accordingly, your profit will be almost fifty times more, that is, 1056% in two weeks!

What else one should wish, you would say. Just open an account, buy Bitcoins and wait for them to make you a millionaire. Indeed, the prospects for this cryptocurrency, according to a number of experts, look quite rosy now. However, if you look at the Bitcoin quotes, you can see that it is capable of not only growing rapidly, but also of falling rapidly. And what should one do in this case?

Option 3. Another advantage of working with professional brokers like NordFX is that they allow their clients to earn not only on the growth of assets such as Bitcoin, but also on their decline. For this, it is enough to open a sell position with the broker or, in other words, to bet that the price of this cryptocurrency will go down. And if it turns out to be correct, you will get a considerable profit as well.
Let's have a look again at the first two weeks of 2020. During this time, the value of Bitcoin not only grew, but also fell at certain points. So, in the period from January 08 to 09, in just a few hours, it fell from $8,440 to $7,675, that is, Bitcoin lost $785 in price. If you had opened a sell position at that time, you would have earned the same $785, and invested only $150. In other words, you would have increased your capital almost five times in one day.

"In fact, it is unlikely that anyone can open and close transactions with 100 percent accuracy," John Gordon comments on the examples above. – This requires knowledge, experience, and intuition. Strong nerves are also of use, especially if the price goes against you. Many people lose their money. But the fact that you can get huge profits from trading cryptocurrencies is an undeniable fact. Thousands of people who, starting from scratch, were able to earn huge fortunes in the hundreds of thousands and millions of dollars is a clear proof of this. So, the virtual market is a way to real money. Big money».

NordFX is an international brokerage company with more than 10 years of successful work in financial markets. The number of accounts opened in the company by clients from almost 190 countries exceeds 1,250,000 today.
Since 2008, NordFX has been awarded more than 50 prestigious professional awards, including 5 awards for outstanding achievements in crypto trading: