Technical analysis in the Forex market provides a wide range of opportunities to study and predict prices. The number of instruments that are capable of solving the tasks set by the trader is hundreds. If the indicators are justifiably amenable to criticism for signal lagging, the levels of support and resistance find their admirers even among  people most skeptical towards technical analysis. This is not surprising. Forex levels are a benchmark that all traders, without exception, pay attention to.

Levels are abnormal zones on the price chart, near which there are sharp changes in the dynamics of quotations. Thus, when the price approaches the levels, there is a noticeable response: bounces, reversals, breakouts, acceleration or deceleration of quotes . Since this happens with enviable consistency, the trader has the opportunity to create trading strategies based on such levels. Trading with their help becomes active, impulsive and allows you to fix a good profit in a short time frame.

The Reason Why Markup is Effective

Trading in the financial markets is carried out using a huge number of instruments. However, there are only two key areas in the analysis - technical and fundamental. Textbooks on them are written and regularly published in all languages of the world. This creates a unified learning base for all traders and investors. Therefore, guided by a similar algorithm of actions, the vast majority of traders will, like you, see Forex levels and push quotes in their direction.

In addition to the same algorithm of actions, do not forget about the convenience of calculations. For example, when a trader chooses a place to place Stop Loss , it is easier for them to focus on round levels. This is convenient, because in the heat of active trading there is no time for the perfect calculation of points - everything is rounded one way or another.

The third argument is monetary policy. Each head of the Central Bank and the government sets a price corridor, which is the basis of the budget. Out-of-bounds always result in the intervention of the regulator.

Types of Levels and Their Differences

There are many ways to calculate levels, and as a result, their types. If we generalize them conditionally, we can distinguish the following main groups: horizontal, sloping, dynamic. The key difference between them is in the way they are built, and the number of elements required for this.

To do the markup, your trading platform must have drawing tools. Broker NordFX offers its clients to use the world's most popular platform - MetaTrader 4 (MT4). Its graphical toolkit, among other things, includes horizontal lines.

For many, the debatable question is at what prices to draw the line. There is no basic difference. The level is marked both by the body of the candle and by its shadow. There is a concept of a zone, so a deviation of several points is the norm. Moreover, the higher the timeframe, the wider this zone will be.

An example of how horizontal Forex levels are marked in Fig. 1: These levels are no different from the previous ones, as far as their impact on price is concerned. The main difference is the angle of the lines. They are drawn at local lows/highs and completely depend on the direction of the trend. The main rule when applying is that the price should bounce. Two points are enough to draw this level. This is a simple geometric rule for drawing line segments.

In literature, they are also called the trend line. If you draw such lines parallel to each other, you can identify price channels. An example of one of them can be seen below in Fig. 2: 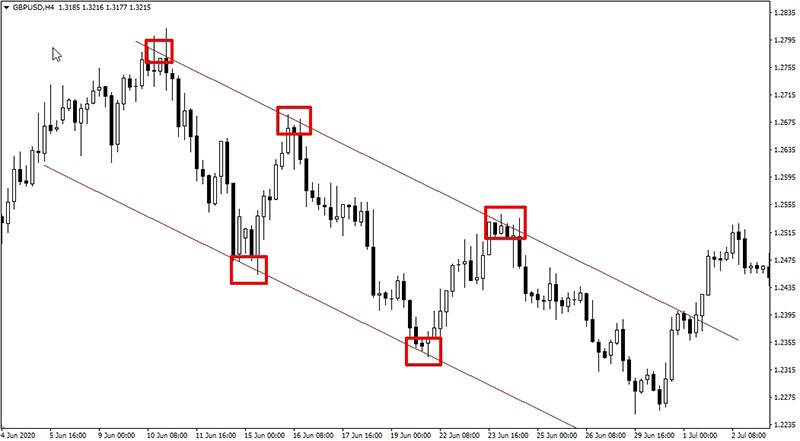 They are used for only one purpose - to find the entry point. It is difficult to set price targets according to them. By the way, when working with sloping levels, the extremes should be consistent, namely, above each other (for an upward market) or below (for a downward one).

In the classical understanding, levels are manual markup. However, progress has gone far from the textbooks of the 80s and 90s of the last century. In addition to markup, indicator techniques are gaining popularity: Moving Average, Envelopes, Donchian Channel, Bollinger Bands.

Their main feature is that they are volatile and are rearranged following the price. This is both their strength and weakness.

The principles of building the horizontal and dynamic level are different, but the properties and principles of use are the same. As an example (Fig. 3), we propose to study the most famous of them, Moving Average, and working it out as a level: 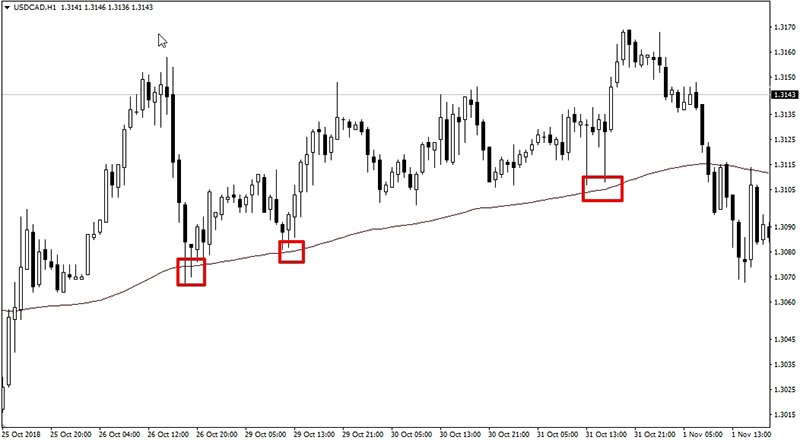 The Difference Between Support and Resistance

Beginners sometimes find it difficult to clearly define what support is, and mistakenly call it resistance, and vice versa. They have the same properties in terms of trade practice. Quotes bounce off them, and accelerate sharply after the breakout. However, the difference still exists: it is the position of the price relative to the level.

Support is the level that the price relies on during its movement. It connects important lows and occurs when traders can no longer, or do not want to sell this financial instrument at lower prices. Resistance, on the other hand, is a level that connects important highs (tops) of the market and stands in the way of growth, preventing the price from going up.

In both cases, it is important in what trend the markup is considered. They can change places during a breakout. An example of how support turns into resistance is shown below (Figure 4): 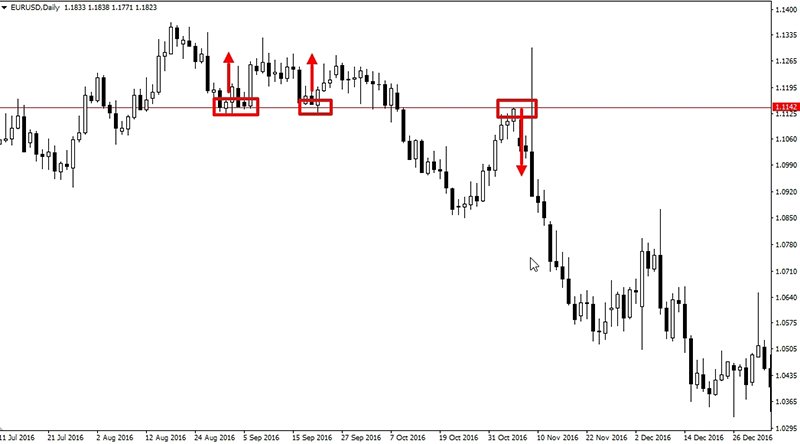 How to Build Forex Support and Resistance Levels

You can build levels on charts of any timeframe in different ways. Professionals often and quickly do this manually using the auxiliary charting tools built into the MT4 terminal. However, it is difficult for beginners to find extremes. To simplify their detection, auxiliary indicators such as, for example, Fractals or ZigZag are used, which automatically highlight local lows/highs.

Pivot, Murray, Fibonacci formulas are also used to calculate support and resistance levels. They are implemented as separate user indicators. It should be noted that there are many other indicators that apply all types of markup without your involvement. Many of them are already integrated into MetaTrader 4, making market analysis much easier.

How Levels Are Used in a Trading Strategy

Patterns in price movements near support or resistance make it possible to use them for different purposes. One of the most important purposes in developing a trading strategy is the signal function. Trading in this case occurs both on a rebound from the level, and on its breakdown. There is also a mixed type of trading, which includes other signals for opening or closing positions as well.

The ways of trading at levels can be very different. Conservative trading , advocated by many textbook authors, involves working in the direction of the trend, while aggressive trading involves opening positions in both directions or against the trend. Each technique has a right to exist, but one should consider how strong the level is. The probability of a breakout of a strong level is extremely low, so rebounds are practiced in this case. Weak levels , which have only a couple of touches, are overcome by the price like a knife in butter. Therefore, the probability of a breakdown of a weak level is quite high. Although false breakouts often occur on Forex - cases when the price seems to have already overcome the support or resistance zone, but instead of going further, it turns back and returns to its previous positions.

At moments when the strength of traders playing to raise and lower the price is roughly equal, there can be price consolidation. If you see that the price is being squeezed like a spring - consolidation is there for you. And we can expect that at some point this spring will be open, which will lead to the appearance of a sharp impulse in the change in quotes and an increase in volatility.

According to many traders, a trading strategy without using Stop Loss is a time bomb. Beginners find it difficult to choose where to place it on the chart, because there is a possibility that the price will accidentally hook it. And it is very disappointing to see how your order closes with a loss by Stop Loss, after which the price will reverse and go in a direction that is profitable for you. That is why it is customary to place Stop Loss beyond the nearest level at a distance of several points from it. Recall that this distance depends on the timeframe you are working on. The higher the timeframe, the greater that distance must be. Thus, on the H4 time frame and above it is measured by dozens of points, forming not a line, but a support/resistance zone. It may also depend on the selected Forex currency pair, as well as the current volatility of the market.

Also, in addition to Stop Loss, levels are used to solve one more task - to determine a price target for profit fixing. Take Profit at the opened trade is placed on a similar principle, which is described above. However, it is put on the open order direction, rather than against it. And here, again, the concept of a zone must be taken into account, because just as the price can slip several points beyond the level (false breakout), the same few points will not reach it.

A huge number of trading strategies have been created at the support and resistance levels of Forex, the effectiveness of which is also influenced by a number of other factors. This is the accuracy of quotes, the size of spreads, the speed of execution of trades, etc. And here NordFX clients have an obvious advantage, since the trading conditions provided by this broker are among the best on the market.

Working on Forex support and resistance levels has a number of advantages and disadvantages. The cons of their use are as follows:

The strengths of the levels are as follows:

Only practice can teach you how to use support and resistance levels effectively. And in order for you to gain the necessary experience without any financial costs, we recommend using a demo account of the NordFX brokerage company. It can be opened for free, and registration will take no more than a couple of minutes of your time.