Forex Trading Robots: What and How Effective They Are


Traders can use not only their knowledge in their work, but also various computer programs: auxiliary scripts, as well as algorithms that can give recommendations and even open and close transactions on their own. These automated trading systems are called Forex robots. This article will discuss them in detail, as well as talk about the types and how to use them.

What is a Forex Robot?

This is a program code that operates according to the algorithm installed in it. There are several types of Forex robots from the point of view of the trading system embedded in them. They can work on the basis of indicators or a specific money and risk management strategy. A very large number of free Forex trading robots operate on the basis of the well-known Martingale strategy.

How does a Forex Trading Robot work? It is pretty simple. In fact, it is an automated strategy that does all the same things that the trader would do, but only without the participation of the latter.

Suppose the robot is based on the Relative Strength Index RSI indicator and operates on the principle of getting out of the overbought and oversold areas (70% and 30% of the indicator scale, respectively). As soon as such a situation occurs on the chart, the robot opens a transaction on its own (Fig.1). A trader would do the same if they worked with such an indicator. 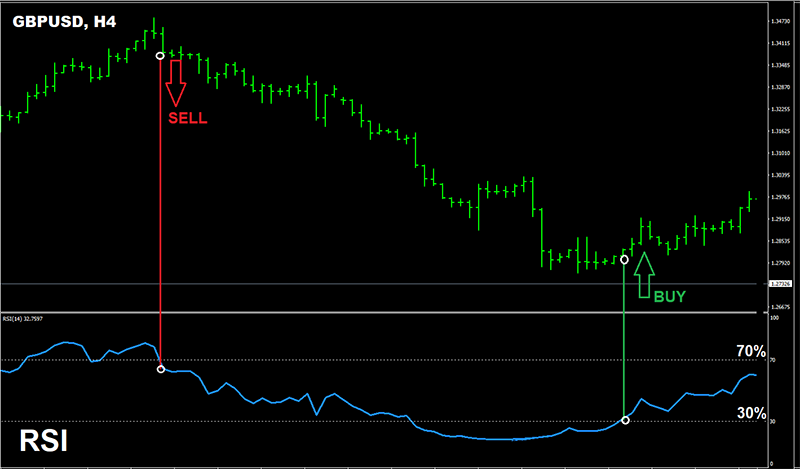 Such a computer assistant program can include either one single indicator or several similar algorithms. For example, the MACD indicator or the famous Stochastic Oscillator can be used in addition to the moving average. In this case, the robot's algorithm will be configured to receive signals based on two indicators, and trades will be opened only when these two indicators give the same commands, for example, to open a long position.

There are two main types of trading systems. The first one is semi-automatic, which only gives recommendations. That is, the trader needs to make their own decisions. The second one works completely autonomously. A trader launches it on their trading platform, and such a system analyzes the market and makes decisions by itself.

It's hard to say which approach is better. Each of these types has both advantages and disadvantages. For example, semi-automatic advisors (with manual opening of transactions) do not provide the trader with complete freedom and require the presence of the terminal at the moment the signal appears.

Fully automated trading bots work on the "plug and forget" principle, but there are also drawbacks here. Given that such robots are programmed to work with a certain set of tools, they cannot take into account, for example, the influence of fundamental factors on the market. And this can lead to losses from the work of such an advisor.

Some Recommendations for Working with Automated Trading Strategies

We have already noted above that robots that work completely autonomously have both their pros and cons. At least, it is not recommended to leave such algorithms unattended for a long time. Below we will give some useful tips for those planning to work with such bots.

1. Take a closer look at the trading system underlying the robot.

If you purchase an expert advisor or download it for free on the Internet, you need to carefully study what lies at the heart of such a trading bot. The fact is that the overwhelming majority of Forex robots are based on the so-called "martingale". What is that? This is a money management method that came to trading from casino.

It is based on the fact that every time you close a losing trade, you need to double the size of the next position. For example, if you opened a trade with 0.1 lot, then in case of a loss, the next trade would open with 0.2 lots. Further, if this trade has not made a profit, the next one will open in the size of 0.4 lots, and so on until you close the transaction at a profit.

As a result of this approach, the very first profitable trade will allow you to cover all losses and make a profit. But the risks of such a strategy are great. The fact is that the trader's deposit is always limited. If there is not enough money to open the next position, the trader will lose all the money that they invested in the formation of martingale steps earlier.

It should be noted here that the settings of the absolute majority of Forex trading robots using this trading strategy allow the trader to change the lot increase coefficient. And it can be set as more than 2.0 or less, for example, 1.5. That is, if you opened the first trade with 0.1 lots, then in case of a loss, the next trade will be opened with 0.15 lots, and so on.

Before giving the robot the opportunity to trade independently on the financial market, it is necessary to configure its main parameters. This applies to both functionality in terms of strategy, and in terms of capital and risk management. (One example of such settings was given above).

The strategy settings can be identical to the indicator settings. Some expert advisors have the option to regulate the algorithms they use. For example, you can set what period of the Moving Average will be used in the robot for trend trading.

As for money and risk management, most automated trading systems have such settings. For example, you will be able to set the robot software at which distance to put stop loss or take profit. And whether to place them at all. Also, the size of the lot with which the bot will work in the financial markets is determined. Some expert advisors set additional parameters, such as maximum deviation or spread when opening positions in order to avoid sending an order to a broker at a disadvantageous price. You can also limit the maximum number of simultaneously opened positions to reduce the risk of losing capital.

The number of settings in Forex trading robots can vary significantly: one computer program can have two or three of them, another - several dozens. The strategy tester, which is built into the MetaTrader-4 (MT4) trading platform, which NordFX brokerage company offers to its clients, will help to deal with them.

Today, you can find both paid and free advisors on the Internet. Many traders prefer the second option, since in this case there are no additional financial costs associated with their purchase.

The advantage of free Forex trading robots is that they really do not require any investment from the trader. However, there is one important nuance here that must be considered. When choosing a free Forex trading robot, you most often do not know the developer and the trading system that underlies such an algorithm. Therefore, in order to understand how it works, calculate its pros and cons, determine the presence or absence of errors in a computer program, you will need to test the work of such an assistant trader in the MT4 strategy tester, and then trade with it on a free demo account.

Paid trading robots are distinguished by a number of advantages, including full technical support from developers, a flexible system of settings and a history of their work with various parameters and trading instruments. In some cases, developers will be ready to make adjustments to the operation of this trading bot, recommended by the Forex trader.

How Forex Trading Robots Are Created

The first thing to know is that a trading robot may not work on all trading platforms. The most popular in the world, as already mentioned, is the MetaTrader-4 platform (or trading terminal), which uses a special programming language MQL4, with which thousands of programs for automatic Forex trading have already been created.

On the MetaTrader-4 platform, a trader will find special tabs with which they will get access to a huge number of special scripts, indicators and robots. One can buy them, rent them or just take them to test. You will also have hundreds of experienced programmers at your service, ready to create an automated trading system according to the algorithm specified by the trader. At the same time, it is very important to correctly draw up a technical task so that programmers do exactly what you expect to receive from them.

There are several myths that are actively spreading on the Internet. We decided to dispel them and give objective information to those who want to try using trading robots in their trading. Here are the most interesting points:

1. Brokers are against the use of trading robots.

That's not true. For example, broker NordFX does not in any way prevent its clients from using such automated solutions. Moreover, robots have absolutely no effect on the relationship between the client and the company. The use of Forex trading robots is completely legal and does not constitute a violation of the Client Agreement.

2. Only paid robots give results.

It's not true either. And very often a free program can turn out to be no worse, if not better, than the one for which the owner asks hundreds or thousands of dollars. Moreover, it is not at all excluded that this "super-expensive", "super-professional" and "super-profitable" robot was stolen from real developers by hacking, or is simply an exact copy of a well-known, outdated model.

Therefore, once again, before using or acquiring any robot, it is necessary to carefully examine its “stuffing” and understand how it works.

3. Robots free the trader completely from having to make any decisions.

This is a false statement. A Forex trader tests and sets up the robot before launch anyway. Moreover, it is recommended to carefully monitor how the bot is trading and in case of a change in the market situation, either temporarily suspend the work or make the appropriate changes to the settings.

So, is it worth using trading robots in trading? This question is completely individual and depends on your preferences, experience, knowledge, availability of free time and the characteristics of your psyche. Definitely, the use of robots does not guarantee success, but the fact is that they can provide serious help in the work of the trader.