Forecast 2021: What to Expect from the Euro and the Dollar


If someone asks which currency pair is the most important and most liquid on Forex, the answer will follow immediately. Even a beginner will say: “Of course, EUR/USD”. There is even nothing to doubt about this: the trading volume for this pair reaches $1.1 trillion per day. These currencies represent two of the world's most powerful economies, and the US dollar is the first most important reserve currency. Most central banks continue to store large volumes of their gold and foreign exchange reserves (over 60%) in US dollars. The euro comes in second with over 22%. 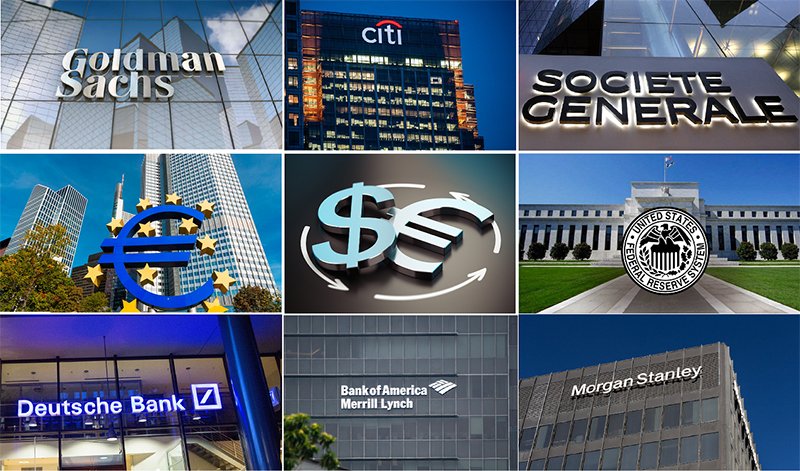 It should be noted that the dollar is gradually losing its positions, according to Bloomberg, its peak (45.3%) in global payments was in April 2015. Now, following the SWIFT statistics, the euro has managed, although not by much, to bypass the dollar. In October 2020, 37.8% of money transfers served by this system were in the euro, while the share of the dollar was 37.64%. (The British pound took the third place with a huge margin with 6.92%).

Despite the weakening US currency, it is certainly too early to bury the dollar. The Bank for International Settlements (BIS) announced in the summer of 2020 that about 50% of cross-border loans and international bonds are denominated in USD. Finally, about half of all trade invoices in the world are issued in dollars, even for non-US trade.

And let's not forget that market analysts evaluate the strength of different currencies by looking at the US Dollar Index (DXY). In fact, this is a basket of monetary units of six countries, the value of which is compared with USD. And the euro takes the lion's share of 57.6% in it (the remaining 5 account for only 42.4%).

All the above statistics indicate unambiguously that EUR/USD is number 1 among the major pairs on Forex. It is this pair that sets the main trends for other currencies. And that is why it is necessary for every trader to know and understand whatever happened to it, is happening and will happen.

A Bit of History

Surprisingly, despite its importance, the EUR/USD pair is quite young. The euro appeared thanks to the creation of the European Union in 1992, first in non-cash form, and it was only on January 1, 1999 that it officially replaced the rest of the European currencies. A few more years passed and in June 2002 the EUR became the sole means of payment in the Eurozone, displacing the then favorite, the German mark (USD/DEM) from the pedestal.

This event was preceded by two others, which had an important influence on the formation of the subsequent EUR/USD exchange rate. The first is a cut in interest rates by the US Federal Reserve in late 2000, and the second is a series of four coordinated terrorist attacks, the largest in the history of mankind, committed in the United States on September 11, 2001, including the destruction of the twin skyscrapers of the World Trade Center in New York. As a result, having started from the rate of 0.93 dollars per euro, by the middle of 2008 the pair rose to the level of 1.60. In other words, the dollar has lost more than 70% against the euro.

However, the European Central Bank (ECB) did not want to see the euro so strong, as it posed serious problems for European exports and dealt a blow to the trade balance. Therefore, verbal intervention began in the market. In addition, positive news constantly came from the United States regarding the state of the economy of this country, as a result of which the EUR/USD pair began to slide southward and recorded the low of the second decade of the 21st century near the 1.032 mark by the end of December 2016.

Many analysts then predicted a quick parity for the pair at the level of 1: 1, but this did not happen. And now the European currency is quoted in the area of 1.22 dollars per 1 euro.

Exactly a year ago, we published forecasts given by experts from leading world banks regarding the EUR / USD rate for 2020, and now we can decide which of them was right and to what extent.

Thus, back in December 2019 analysts at Deutsche Bank, Goldman Sachs, Bank of New York Mellon and a number of other banks reached consensus, predicting a fall in the US dollar in 2020. The main reason was the slowdown in global economic growth. In addition, it was predicted that on the eve of the presidential elections, the US Federal Reserve under pressure from Donald Trump will continue to reduce interest rates, or at least keep them at the current level.

Recall that in December 2019, only the first outbreak of COVID-19 in Chinese Wuhan was recorded, and there was no idea of a global pandemic. But even then, the Financial Times published a forecast of Citigroup experts that the quantitative easing (QE) policy pursued by the US Federal Reserve and pumping the market with cheap dollar liquidity could cause the dollar to fall. Colleagues from Citigroup were supported then by analysts at the Swiss bank Lombard Odier, as well as one of the world's largest investment companies, BlackRock. And this scenario also came true 100%, and the coronavirus pandemic only played the role of a catalyst for this process: almost a quarter of all existing dollars were released in just one past year.

Some conspiracy theorists argue that the coronavirus was deliberately invented to implement the plan of a secret world government and help the financial elite buy up the bulk of dollar liquidity on the cheap. But exposing all sorts of conspiracies is not the purpose of this review. Therefore, let us turn to specific figures and see whose forecast turned out to be the most accurate.

According to Bloomberg, the consensus forecast of the largest market operators suggested that by the end of 2020, the US dollar wouldl "lose weight" by another 400-500 points, and the EUR/USD pair would rise to the 1.16 zone.

JPMorgan Chase specialists predicted the level of 1.14 for this pair for the end of 2020. Goldman Sachs and Bank of America Merrill Lynch called 1.15. And the German Deutsche Bank and the French Societe Generale pointed to the level of $1.20 per euro. The last two forecasts turned out to be the most accurate: the pair reached a high of 1.225 at the end of 2020. (Recall that all these scenarios did not take into account the consequences of the blow that COVID-19has inflicted on the economy).

Some experts believe that for the United States, the onset of COVID-19 can be compared with the Third World War: more than 300,000 dead, a third of the working population is left without a constant source of income. The pandemic hit the country at the end of the 10-year economic growth cycle and in a presidential election year. Additional pressure on the economy was exerted by the trade wars that Donald Trump unleashed with China and Europe, as well as the growth of the dollar supply.

Most likely, in 2021, money will actively flow to Europe, and the dollar will face a deep devaluation. True, different analysts assess the depth of a possible fall in the USD differently.

So, for example, Goldman Sachs predicts a fall in the weighted USD rate in 2021 by only 6%, while Morgan Stanley expects the EUR/USD pair to rise from current levels to 1.25. (By the way, the figure 1.25 also sounds in many other moderate forecasts).

But there are also those who predict a catastrophic fall in the American currency. Prominent economists, Euro Pacific Capital President Peter Schiff and former Morgan Stanley Asia head and Fed Board member Stephen Roach estimate the likelihood of a dollar collapse in 2021 at 50%. At the same time, Roach believes that the devaluation of the dollar can reach 35%. A slightly smaller but also impressive devaluation of 20% is forecast by analysts at Citigroup. That is, in their opinion, we can see the EUR/USD pair in the 1.40-1.44 zone by the end of next year.

What can stop the dollar from falling?

Naturally, the Federal Reserve's monetary policy tightening. As of today, long-term inflation expectations have already jumped to 1.85%, which is not far from the regulator's target threshold of 2.0-2.5%. This inflation leads to the depreciation of the dollar. And at some point, lest the US currency collapse definitively, the Fed will be forced, albeit with great reluctance, to stop pumping the economy with cheap money and start a cycle of raising basic interest rates.

By the way, Europe, perhaps even more than the USA, is interested in stopping the growth of the EUR/USD pair.

Since mid-March 2020, the euro has strengthened against the dollar almost continuously. This is despite the fact that the ECB has printed over €2.2 trillion in a year and set negative interest rates.

There are calculations showing that a 10% strengthening of the euro is reducing Eurozone GDP by about 1%. And imagine that the EUR/USD pair will rise, as predicted in Citigroup, to the level of 1.40. Such growth would put all European exports at a blow. Who will then buy goods from the EU at rapidly rising prices?

The ECB already had a chance to weaken the euro against the dollar. However, this did not happen: the European regulator has decided not to interfere in the affairs of the foreign exchange markets and simply limit itself to "monitoring the exchange rate." But, according to many analysts, with the growth of the pair to levels around 1.25, the ECB will be forced to take very serious steps to limit the further growth of its currency. And it is quite possible that the next program of assistance to the EU economy in the amount of €2 or €3 trillion will be adopted in the near future. And in the wake of Europe, similar steps will be taken by the central banks of Great Britain, Canada, China and many other countries. And if 2019-2020 can be called the time of the World Trade Wars, then 2021 will be the time of the World Currency War.

Although ... most likely we will see both wars at the same time.

Happy New Year, 2021! It promises to be very interesting!