Stocks of the world's largest corporations, such as IBM, JP Morgan Chase, Coca-Cola, Mastercard, McDonalds, Microsoft, Twitter, UBER, eBay, Alibaba, Deutsche Bank and many others take a prominent place in the range of trading instruments offered by NordFX brokerage company. But, like any other financial assets, these securities can not only rise, but also fall in price. Accordingly, both traders and investors can both earn and lose their money on them.

Of course, everyone would like to take the first path. That's why we decided to talk about how Warren Buffett who earned the first $5 on the stock exchange at the age of 11, became one of the richest people in the world with a fortune of $96 billion at the age of 90.

“The Seer,” “Wizard of Omaha,” “Oracle of Omaha” - this is what the legendary investor is now called. It is now that he manages the investment conglomerate Berkshire Hathaway, which includes more than 60 companies. But it was back in 1941, that 11-year-old Warren, together with his sister, acquired their first 3 shares, which they sold as soon as their price increased slightly. The profit from this operation was $5. But the stocks continued to rise, and if the boy had not rushed to sell them, he could have made 100 times more, that is, $500.

This was the first lesson in financial literacy, of which there will be many more on his life path. As a child, Warren also made money from delivering the Washington Post, selling golf balls, and at the age of 15, together with his friend, he bought a second-hand slot machine for $25, which they installed at a local hairdresser. Over the course of several months, they installed several more machines at three different barbershops in Omaha. It was already a serious business, which was sold for $1,200 at the end of the year:  quite a lot of money for 1945.

(An interesting fact: Buffett bought shares in the Washington Post for $11 million during the 1973 stock crisis, the same newspaper that he was distributing when he was a boy. Perhaps it was his childhood memories that prompted him to this deal).

By the time he graduated from college, Buffett had accumulated $9,800 (more than $100,000 today, adjusted for inflation), which formed the basis of his future multi-billion-dollar fortune. 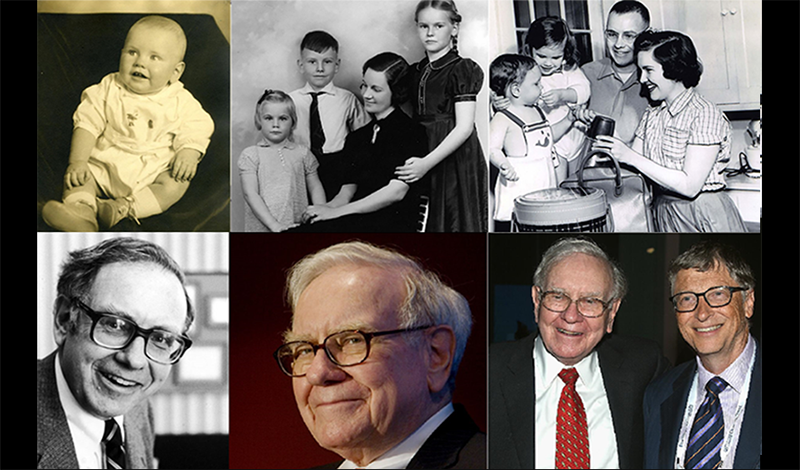 Tantum possumus, quantum scimus - "We can as much as we know" - says the motto in Latin. Warren Buffett has proven the correctness of this saying by his own experience. One of the important milestones of his education was his studies at the Columbia University Business School, where his idol, Benjamin Graham, taught.

Graham's famous books “Securities Analysis” and “Intelligent Investor” have been republished for many decades. However, the author himself was not only an excellent teacher and theorist, but also a very successful practitioner. Graham gave such valuable advice In his lectures that they replaced several years of work on Wall Street.

After completing his studies at Columbia University in 1954, Buffett spent three years in securities trading, after which Graham hired him as an investment analyst. Buffett offered his services free of charge, realizing that the experience he would gain while working for Graham was invaluable. However, in addition to experience, the future legend managed to earn a lot of capital. By the time Graham retired, Buffett was already a millionaire by modern standards. He returns from New York to his native Omaha, where he opens his own investment company.

More than half a century has passed since then. But even now, Warren Buffett spends 80% of his working time on acquiring new knowledge - Tantum possumus, quantum scimus.

Buffett said not so long ago in his message to Berkshire Hathaway shareholders that even a "monkey with darts" could make money on investments and compared the management of a fund to running a restaurant. But we think the billionaire was joking or just cheating. Therefore, we would pay much more attention to the investment rules that Buffett formulated on the basis of his life and professional experience. And that allowed him to become what he is now.

1. Investments must be long-term. If you do not have the funds and patience to hold your shares for 10 years, you should not hold them for 10 minutes.

2. The frequency of transactions affects the return on the investment portfolio due to commissions.

3. Invest in what you know thoroughly. Invest only in those industries in which you are well versed, so to speak, understand the "physics" of the production process.

5. When buying securities, you should first of all pay attention to fundamental factors, and not to current exchange prices.

6. Do not follow stock quotes all the time and do not trust random price fluctuations. With a competent selection of stocks, fundamental factors will take their toll.

7. The investment process needs to be trained.

9. When buying shares, you should focus on future earnings, and not on past performance. Look for companies with outstanding results while analyzing competitive advantages, including unique patents, licenses, and more.

10. Your availability of funds is not a reason for spontaneous purchases.

12. Get rid of unsuccessful investments in time.

13. Regular payment of solid dividends is of no small importance in the formation of an investment portfolio.

14. The most valuable investment is investment in your own development. Thrift, perseverance and hard work are some of the most important qualities of an investor.

15. Make sure that the investment process brings you moral satisfaction.

Attentive readers will say that the rules listed by the billionaire are suitable only for long-term investors, and with a fairly solid capital.

Yes, this is true. This is just one of the strategies of one of the world's most famous investors. And here it is worth recalling that NordFX clients can not only make long-term investments, but also engage in active trading (difference No.1). CFD trading in shares of the world's largest corporations allows you to make money not only on the growth of these assets, but also on their fall (difference No.2). And a leverage of 1: 5 allows you to make a profit that is 5 times higher than what you would get in a normal situation (difference No.3).

It is also important that the full commission at the completion of the transaction is just 0.2%. Of course, this does not override Buffett's Rule No.2, but it doesn't really affect the profitability of your operations that much (difference No.4).

Another advantage of the NordFX broker is the ability to carry out transactions for traders with limited financial resources (difference No.5). The minimum lot at NordFX is 1 share. And, for example, if the current value of Amazon.com inc. is $3545, which is quite a large sum, the stock price of Ford Motor Company is $20, and Hewlett Packard is even less, just about $15 . So even with just $100, a trader can apply a variety of trading strategies and create all kinds of investment portfolios that take into account not only the bull market, but also the bear market.

Undoubtedly, it is a nice thing to get dividends if the “long” position to buy them is held until the appropriate date. And here we completely agree with Warren Buffett's Rule No.13. However, dividend payments will be written off from the “short” position. Therefore, before you start trading, we strongly advise you to spend time learning and studying the securities you are going to work with. Do not forget that Tantum possumus, quantum scimus - "We can do as much as we know."