What to Expect from the Dollar and the Euro in 2023


We analyzed last week what happened to the two most popular currencies in 2020-2022, what forecasts were given then by the strategists of leading financial institutions for EUR/USD, and how accurate they turned out to be. Now it's time to tell what experts expect from 2023. 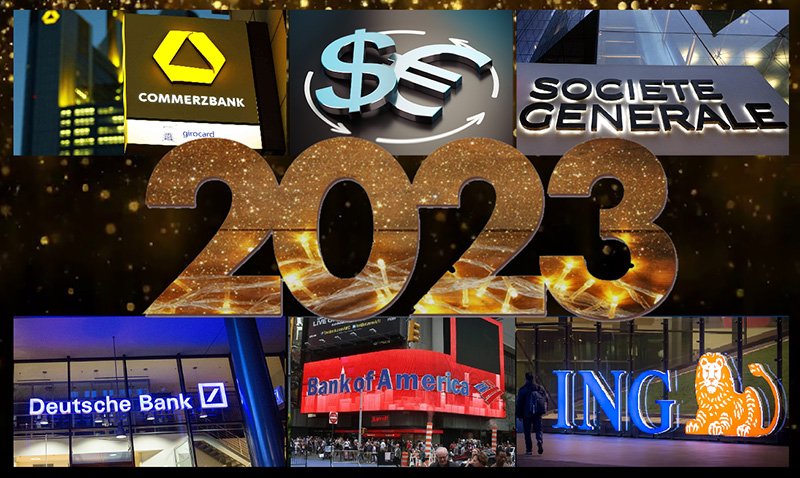 It should be noted right away that these forecasts differ greatly: life has brought too many “surprises” in recent years and has left too many unresolved problems for the future.

What will be the geopolitical situation, in what direction and at what pace will the monetary policy of the Fed and the ECB go, what will happen to the recession and labor markets, will it be possible to defeat inflation and curb energy prices? We have yet to find out the answers to these and many other questions. There are a lot of uncertainties, which do not allow experts to come to a common opinion.

Some believe that EUR/USD will approach the 2000-2002 lows around 0.8500, while others believe that it will rush to 1.6000, as it was in 2008. Of course, these are extreme values. It is highly likely that the pair will not reach either the first or the second of these extremes, and the range of oscillations will be much narrower.  At least, this is what most reputable experts point out, and we will introduce you to their forecasts.

What the Bulls Say for EUR/USD

Deutsche Bank strategists assume that the pair may return to the February-March 2022 figures in 2023 (a two-month fluctuation range of 1.0800-1.1500). In their opinion, this may happen even if the geopolitical situation does not improve and remains at the level of the second half of 2022. However, in their opinion, such a weakening of the dollar is possible only if the Federal Reserve begins to ease its monetary policy in the second half of 2023.

And that is what might not happen. Recall that Fed Chairman Jerome Powell said at the press conference following the December FOMC (Federal Open Market Committee) meeting that the regulator will keep interest rates at their peak until it is sure that the decline in inflation has become a stable trend. The base rate can be raised to 5.1% in 2023 and remain so high until 2024. (Recall that 4.6% was mentioned as the peak rate in the September statement). According to Jerome Powell, the Fed understands that this will trigger a recession, but is willing to pay that price to control inflation.

It should be noted that the position of the US Central Bank runs counter to the position of the United Nations, which called for a suspension of rate hikes. The UN believes that further tightening of monetary policy could cause serious damage to developing countries, which have already suffered greatly from the increase in the cost of goods in the United States.

In addition to putting pressure on the Fed, there is another way to balance and even weaken the dollar's position. This is what the ECB and several other Central Banks have demonstrated in recent months by raising their own interest rates. As we wrote in the previous review, the common European currency managed to seriously push the dollar over the last three months of 2022 and lift EUR/USD by about 1,200 points.

ECB President Christine Lagarde, as well as her overseas counterpart, showed a hawkish attitude at the press conference on December 15 and made it clear that quantitative tightening (QT) in the Eurozone will not end there: the euro interest rate will face several more increases in 2023. The ECB also plans to start reducing its balance sheet from March.

At the beginning of 2023, the gap between the dollar and euro rates is 200 basis points (4.5% and 2.5%, respectively). The swap market expects that the European regulator may raise its rate by another 100 bp in the coming year, which will provide some support for EUR/USD.

Economists at Bank of America Global Research agree with this development. “According to our baseline scenario,” they write, “the US dollar will remain strong in early 2023 and will switch to a more stable downward trajectory after the Fed's pause.” Starting from Q2, according to BofA, the dollar will gradually weaken, and EUR/USD will rise to 1.1000.

German Commerzbank supports this scenario. “Given the expected change in the interest rate of the Fed and provided that the ECB refrains from cutting interest rates […], our target price for EUR/USD for 2023 is 1.1000,” economists of this banking group predict.

The French financial conglomerate Societe Generale also votes for the weakening of the dollar and the growth of the pair. “We expect,” says Kit Juckes, Chief Global FX Strategist at SocGen, “that the yield difference between 10-year US and German bonds will fall from 180 basis points to 115 basis points by the end of Q1, and the difference between 2-year interest rates will fall from 190 bps to less than 1%. The last time we saw such a difference between rate and return, EUR/USD was above 1.1500 and this is where it will be by the end of Q1 if it continues to rise at the same rate as it reached 0.9500 at the end of September ".

What the Bears Say For EUR/USD

Economists at Internationale Nederlanden Groep have taken a much more radical stance. ING is confident that all the pressures of 2022 will continue into 2023. High energy prices will continue to put pressure on the European economy. Additional pressure will be exerted if the US Federal Reserve suspends the printing press before the ECB does. Analysts of this largest banking group in the Netherlands believe that the exchange rate of 0.9500 euros per dollar will be adequate in Q1 2023, which, however, may grow to parity of 1.0000 in Q4.

Many other authoritative experts also support the US currency. Thus, Dave Schabes at the University of Chicago's Harris School of Public Policy believes that Russia's war with Ukraine threatens to slow economic growth across Europe and prolong the continent's energy crisis until 2023 and possibly 2024. According to the scientist, this is a specific factor contributing to the strength of the dollar. “The US has always been considered the world's number one safe haven in times of political or military uncertainty,” he says.

Eric Donovan, head of Institutional FX at StoneX, a financial services company, shares the same point of view. “The main reason the dollar has become so strong is because it is still considered a safe-haven currency and it will strengthen during periods when the markets are in a state of fear,” he explains. Therefore, the dollar will remain strong against European currencies as long as this war continues.

The past year, 2022, was not an easy one: the problems created by the coronavirus pandemic were superimposed by the tragic events in Ukraine, which have hit the entire global economy. However, as the legendary King Solomon said to the king of Ethiopia: "This too shall pass." We really want to believe this.