The Mystery of Satoshi Nakamoto. Who is the mysterious creator of bitcoin?


If you were even a little interested in cryptocurrencies, you probably heard the name of Satoshi Nakamoto, probably the most mysterious person of the 21st century. Creator of the world's first cryptocurrency. Person who appeared from nowhere and disappeared o who knows where. Or not a person, but a group of people? Could it be him? Or her? Or them? We'll call him “he” In this article, although that's just a guess. So, who, after all, can hide behind this pseudonym? Let's try to dive deep into this mysterious story.

Veni, vidi, vici is a popular expression attributed to the ancient Roman dictator and commander Gaius Julius Caesar. Translated from Latin, it means "I came, I saw, I won." With regard to Satoshi Nakamoto, one more word could be added to this motto: Veni, vidi, vici, abiit - I came, I saw a problem, I won, and I left.

Appearance (Veni). The world first learned about this man in 2008. The bitcoin.org domain was registered then, in August, where a description (White Paper) of the cryptocurrency was published after a while. Satoshi Nakamoto was listed as the author of the nine-page publication titled “Bitcoin: A Peer-to-Peer Electronic Cash System”, and his email was also listed next to it. (The website bitcoin.org still exists, and the original of this article can be found there.)

Birth (Vidi, Vici). Nakamoto's publication attracted the attention of both the scientific crypto community and cryptography enthusiasts. It began to be discussed on forums and in correspondence. The idea took shape just a few months later, in January 2009, the bitcoin (BTC) network was launched, and Nakamoto generated the first blockchain block.

According to some estimates, out of 1.6 million coins mined in 2009, about 1.48 million may belong to Satoshi himself. This “chest with digital gold” has not been claimed by anyone until now (2022). Despite fluctuations in the BTC exchange rate, it is estimated at several tens of billions of US dollars. Thus, if Nakamoto comes out of nothingness, he would be one of the richest people on the planet.

Disappearance (Abiit). Satoshi Nakamoto waived the copyright in mid-2010, sent the BTC source code to programmer Gavin Andersen, transferred the rights to the domain to members of the bitcoin community, and withdrew from further work on the project. His last emails were dated April 26, 2011, after which their author... disappeared completely. Thus, the creator of bitcoin existed in the public space for less than three years. However, if he did not completely change the world in this short period of time, at least he influenced it strongly. Bitcoin gained millions of fans, some countries began to use it on a par with their own currency, and thousands of followers, including even Central banks, started creating their own digital assets. 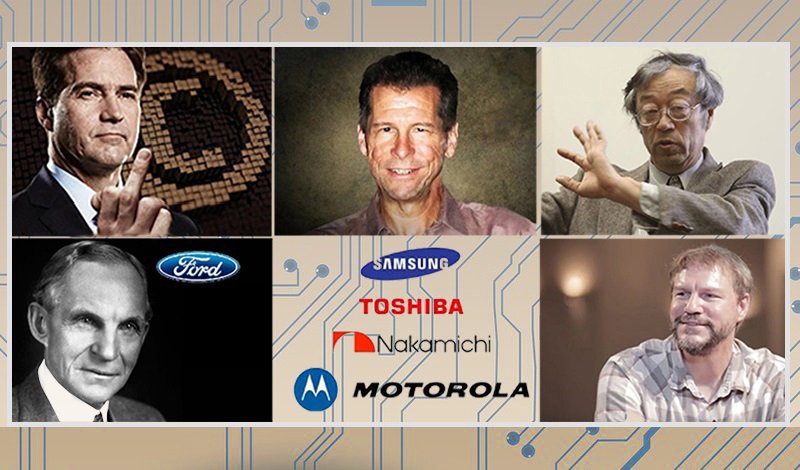 Who is Mr. Nakamoto?

The answer to this question has been worrying the minds of the crypto community for many years. Nakamoto himself indicated in his profile on the P2P Foundation website that he was born in 1975 and lives in Japan. (The P2P Foundation is the Equal Alternatives Fund, which aims to study the impact of peer-to-peer technologies on society).

Maybe someone believed this biographical data, but not a single confirmation of either this date of birth, or nationality, or the place of residence of the creator of bitcoin was found. Moreover, out of his almost 500 emails, there is not one sent at the height of the working day in Japan between 2:00pm and 8:00pm. He mostly wrote when Japan was asleep. But life was in full swing in the United States at that time.

A number of experts believe that both the White Paper and Nakamoto's emails were written by a native English speaker. However, opinions differ as to whether he is American or British. You can find specific words and phrases in the texts that are characteristic of both. Maybe he is a Brit who has lived in the US for a long time? Or maybe it's not him, but they're a whole group of British and American scientists?

Another feature that the researchers drew attention to is that Nakamoto always skipped not one, but two lines between paragraphs in his texts. Such a specific design of texts is typical for those who are used to typing on a typewriter, and not on a computer. So, it is possible that he was born not in 1975, but much earlier.

The Many Faces of Anonymous

So after all, who can hide behind the pseudonym Satoshi Nakamoto and who, in fact, created the first cryptocurrency? There are many versions, let's start with the most incredible in our opinion.

Version No. 0, historical: Henry Ford. Back in 1921, the American industrialist Henry Ford proposed the creation of an "energy currency" that could form the basis of a new monetary system. This idea bears a striking resemblance to the peer-to-peer electronic money system described in the White Paper and bitcoin mining. The legendary auto manufacturer published an article in the New York Tribune on December 4, 1921, that outlined the idea of replacing gold with an energy currency that could loosen the grip of banking elites on global wealth. To do this, Ford proposed to build "the world's greatest power plant" and create a new monetary system based on "units of power."

Version No. 1: Group of Companies. Some fans of conspiracy theories even figured out the members of the group. These are, in their opinion: Samsung, Toshiba, Nakamichi and Motorola. As you can see, it is easy to get the required name by adding a few initial letters from their names. But why did these giants need to create bitcoin and why are they still hiding their involvement in this project? It is unlikely that anyone can give a convincing answer to these questions.

Version No. 2: US Intelligence Agencies. Conspiracy theorists say that most likely it was not the CIA, but the US National Security Agency (NSA). The world-famous Massachusetts Institute of Technology (MIT) published a scientific paper on June 18, 1996, authored by a group of the crypto-encryption department from... NSA. The article is still on the MIT website and is titled "How to Make A Mint: The Cryptography Of Anonymous Electronic Cash". Its authors: Laurie Law, Susan Sabett, Jerry Solinas from the National Security Agency/Office of Information Security Research and Technology/Cryptology Division. If you look at this document, it becomes obvious that, in practice, this is a description of the principle of the cryptocurrency.

Unlike Version No. 1, it is more or less clear here why the secret services needed it (at least to finance secret operations around the world), and why it was all classified then.

Version No.3: Nick Szabo.  This scientist-programmer-cryptographer from the USA is considered one of the creators of digital gold. He developed the progenitor of bitcoin, BitGold. However, this idea has not been widely used in practice. And Nick Sabo himself has always denied the idea that he and Satoshi Nakamoto are the same person.

Version No.4: Craig Steven Wright. An Australian entrepreneur and computer scientist who, unlike Nick Szabo, claims to be the enigmatic Nakamoto. More precisely, the main member of the team that worked with this pseudonym. This is what he told the BBC in May 2016 but was unable to provide any convincing evidence.

Version No.5: Hal Finney. Another contender for the role of the creator of the main cryptocurrency. This cryptographer was on the White Paper mailing list, became one of the first bitcoin contributors, started mining BTC. Hal Finney received the first bitcoin transaction from Satoshi Nakamoto, with whom he worked on the project at the initial stage of its development and for which he came up with the proof-of-work (PoW) technology, on January 12, 2009. In addition, Finney lived next door to a man whose real name was Dorian Prentice Satoshi Nakamoto. Finney's writing style is very similar to Nakamoto's, which led to the suspicion that their correspondence with each other is nothing more than a distraction stunt.

Version No.6: Dorian Prentice Satoshi Nakamoto. It would seem quite logical to assume that Satoshi Nakamoto is Satoshi Nakamoto. Information about this physicist and systems engineer from California appeared in 2014, and his photo spread around the world instantly, becoming almost another symbol of bitcoin. The only problem is that this person, apart from his first and last name, had nothing else to do with bitcoin, and he himself completely refused such assumptions.

From Conspiracy to Money

The list of versions could be continued, if not indefinitely, then for quite a long time. And footage from the cemetery, where the alleged associates of the creator of bitcoin allegedly carry the coffin with his body, can be put at the end of it. This video is also circulating on the net. However, we think that mysticism and conspiracy theories are quite enough for one article, so it's time to talk about the specifics.

In our case, it lies in the fact that guessing who created bitcoin is, of course, interesting, but it is much more interesting to make money on this cryptocurrency. To do this, you need, at least, to open an account with the NordFX brokerage company, where you will get access to a wide range of trading instruments, among which, of course, there are bitcoin and other cryptocurrencies.

It is very important to know that the opportunity to earn not only on the growth, but also on the fall of digital assets is very important in these turbulent times. And you will get this opportunity at NordFX. Moreover, thanks to margin trading, you will be able to multiply your profits, since you will need only 150 USD to open a position in 1 bitcoin, in 1 Ethereum - 15 USD, 1 EOS - 0.3 USD, and for 1 Ripple - only 0.02 USD. When trading with these and other TOP cryptocurrencies, you will be able to use a wide variety of trading strategies. But at the same time, of course, you must not forget about money management and the risks that margin trading carries. And if you really know who Satoshi Nakamoto is, don't forget to share this exciting discovery with us.